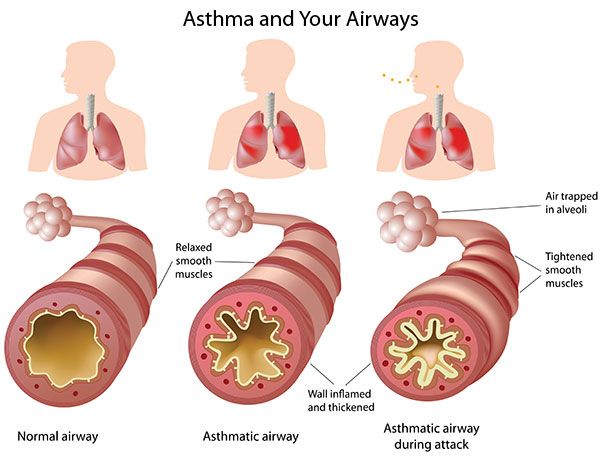 It is a widely prevalent disease, affecting the young, old and even the children. Today millions people suffer from Asthma and bronchitis.

More than 6% of children in the United States have been diagnosed with asthma, a 75% increase in recent decades. The rate soars to 40% among some populations of urban children. Asthma is usually diagnosed in childhood. The most disheartening aspect of asthma is that it does not get completely cured through medication.

Asthma is defined as a disease characterized by an increased responsiveness of the trachea and bronchi to various stimuli, and is manifested by widespread narrowing of the airway passage that changes in severity either spontaneously or as a result of treatment. Attacks are brought on by the spasms of the smooth muscles that lie in the walls of the smaller bronchi and bronchioles, causing the passageways to close partially. The patient has trouble exhaling and ‘the alveoli may remain inflated during expiration.

Usually the mucus membranes that line the respiratory passageways become irritated and secrete severe excessive amount of mucus that may clog the bronchi and bronchioles and worsen the attacks. 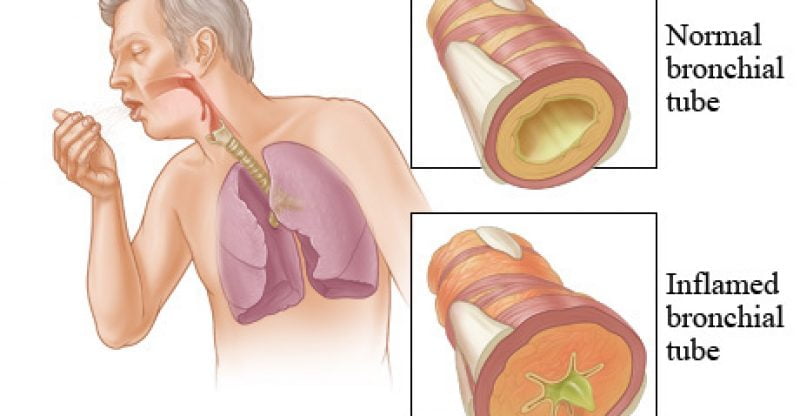 Signs and Symptom Asthma and Bronchitis

Airway narrowing causes symptoms such as wheezing, shortness of breath (difficulty in breathing), chest tightness, and coughing, strain in exhaling the air. The asthmatic has to try hard for just getting a breath. In severe cases, the life of the patient becomes miserable and it makes him almost invalid. In medical terms the complicated condition of asthma is called Emphysema.

Cause for Asthma and Bronchitis

Asthma might also have a psychosomatic origin. Attacks of asthma involve both physical and psychological factors. It may be triggered by emotions, environmental extremities (cold air, exercise or exertion, allergen) and viral infections. Asthmatic attacks may also be generated and triggered in brain itself.

If a person is allergic to particular thing, merely looking at such things brings asthmatic attack. In children, the most common triggers are viral illnesses such as those that cause the common cold.

Stimuli in Asthma and BronchitisThe airways of asthmatics are “hypersensitive” to certain triggers, also known as stimuli

There are about ten different categories of stimuli as follows,

Treatment of Asthma and Bronchitis with holistic and natural view

There is no permanent cure for asthma in Allopath they may alleviate the symptoms for time being. And they are are habit forming. One of the strongest risk factors for asthma is allergy, which is an sign of lowered resistance and disharmony with nature; caused by faulty eating and bad habits. So it’s proper healing will be to restore harmony with nature.

Asthmatic and Bronchitis patients are recommended to do

Alternative and complementary medicine in Asthma and Bronchitis

A study of “manual therapies” for asthma, including osteopathic, chiropractic, physiotherapeutic and respiratory therapeutic manoeuvers, found there is insufficient evidence to support or refute their use in treating asthma; these manoeuvers include various osteopathic and chiropractic techniques to “increase movement in the rib cage and the spine to try and improve the working of the lungs and circulation”; chest tapping, shaking, vibration, and the use of “postures to help shift and cough up phlegm.” On the other hand, one meta-analysis found that homeopathy has a potentially mild benefit in reducing symptom intensity; however, the number of patients involved in the analysis was small, and subsequent studies have not supported this finding. Several trials have suggested some benefit from various yoga practices, ranging from integrated yoga programs —”yogasanas, Pranayama, meditation, and kriyas”—to sahaja yoga, a form of meditation. Ayurveda recommends use of herbs such as Ajwain, Harad, Hing, Ajamoda, Lavanga, Sunthi and others.

Yoga treatment for Asthma and Bronchitis

The Asthma and Bronchitis patients have to do three things:

(iii)Avoid the things which strain the nerves.

Beside the above mentioned asana and pranayama practice of yoga nidra, concentration and meditation gives the best result.

Principles and Advice or Guidelines for in Asthma (Asthmatics) and Bronchitis

Benefits of Yoga in Asthma (Asthmatics) and Bronchitis

Asanas and pranayama have corrective, curative and strengthening effects on the condition of the lungs and the bronchiole linings.

Pranayama does the internal purification. As we know that air has some fantastic properties like absorbing property. It absorbs certain things as moisture, fragrance and odour. When air is kept in the body for a longer time, it absorbs the impurities of the system and when it is expelled with a force it carries those inner impurities out. Further, when external pressure is given it maximizes the inner penetration of the air and enables it to rub, activate and give inner massage to the body cells and organs.

Sahaja yoga in the management of moderate to severe asthma: a randomised controlled trial

Asthma: the yoga perspective. Part II: Yoga therapy in the treatment of asthma.

Yoga as therapy in psychosomatic medicine.

A pilot study of mind-body changes in adults with asthma who practice mental imagery.

Clinical study of yoga techniques in university students with asthma: a controlled study.

Evaluation of yoga therapy programme for patients of bronchial asthma.

Effect of yoga training on exercise tolerance in adolescents with childhood asthma.