From puberty (menarche-onset of the menses) until menopause a women’s reproduction system under goes many cyclic changes.

The cyclic changes are related to the changes in the endometrium (inner lining of the uterus), breast, ovaries, vagina, hormone secretions, and even emotional attitudes.

The menstrual cycle (of 28 days) is generally divided in to four phases,

with major events occurring in each phase. The 4 phases are

The cyclic reproduction changes of the human female are marked by menstruation, during which some cells, uncloatted blood from ruptured blood vessels, other fluids and uterine endometrium are released through the cervix and vagina. Each menstrual cycle occurs about every 28 days and last for 4 – 5 days. The menstruation occurs 12 to 14 days after the ovum is released from the ovary (ovulation), about once in four weeks. The periodicity of cycle varies with individuals. After fertilization, menstruation ceases and it is the first indication of pregnancy.

The menstrual (destructive phase) the uterus lining i.e. endometrium and its blood vessels break, and is discharge with in blood, mucus, cells debris, and other fluid as the menses by way of the vagina. This may last for 4 – 5 days. The menses occur when fertilization does not take place.

Occur between the end of the menses and the ovulation. In this phase, under the stimulation of estrogen the uterine endometrium undergoes a process of growth (proliferation) and a new thick endometrium is formed. In the ovary, the follicles begin to develop in to a graafian follicles. This phase include cycle days 6- 13 or 14 in a 28 day cycle. The ovulatory phase indicates the rupture of the graafian follicle and released of the ovum (ovulation). It occurs some 14 days after the start of menstruation during this phase the concentration of estrogen is high in blood, and it stimulates the ovulation. The blood vessels enlarge and grow in the endometrial wall, and some secretary cells or glands are formed.

Occur between ovulation and the onset of menses, i.e. the phase last about 14 days (cycle days 15- 28). The endometrium, which is under the influence of progesterone and estrogen, increases in size, becomes thick, the endometrium glands become enlarged, undergo maximum secretory activity and its blood vessels become coiled and enlarged.

The ovum released in ovulatory phase may or may not be fertilize. If the ovum is fertilized, it becomes embedded in the endometrium (implantation), the corpus luteum remains to secrete progesterone which helps the embryo to grow with in the uterus. If the ovum is not fertilized, the corpus luteum disintegrates and the progesterone level falls sharply. 14 days after ovulation unless fertilization occurs, the menstruation begins again.

Following hormones regulates the menstrual cycle. These hormones have profound effects on the ovaries and the uterus.

The follicle stimulating hormnones (FSH) and the luteinizing hormone (LH).

In next two weeks the high concentration of estrogen in blood stream stimulates the anterior pituitary to produce second hormone called luteinizing hormone (LH). LH brings about ovulation and changes the graphian follicle into a corpus luteum.

The corpus leuteum secrets yet another hormone, the progesterone whose main function is to prepare uterus for pregnancy. The luteotrophic hormone (LTH) of corpus luteum seems to be responsible for production of progesterone, and maintenance of corpus luteum. If corpus luteum is not maintained, the implanted fertilized egg is carried away in the menstrual flow(abortion)

In the absence of pregnancy, corpus luteum stops secreting progesterone, anterior pituitary starts secreting FSH again, and the cycle is repeated. The disorders of the female reproductive system are frequently involved in the menstrual disorders.  Some of them are: 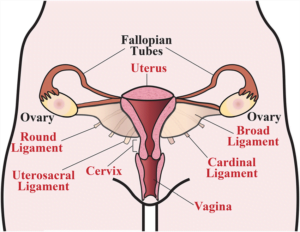 Amenorrhoea means without monthly flow, i.e. the absence of menstruation.  If a woman has never menstruated, the condition is called Primary amenorrhoea. This can be caused by endocrine disorders, most often in the pituitary gland and hypothalamus or by genetically caused abnormal development of the ovaries or uterus.

Secondary amenorrhoea, the skipping of one or more periods, is commonly experienced by women at some time during their life. Changes in body weight, either gains or losses often cause amenorrhoea. Obesity may disturb ovarian function, and similarly the extreme weight loss that characterizes anorexia nervosa often leads to a suspension of menstrual flow.  When amenorrhoea is not related with the changes in body weight, its causative factor may be the deficiencies of pituitary and ovarian hormone. Amenorrhoea may also be caused by continuous involvement in rigorous atheletic training.

It refers to pain associated with menstruation and the term is usually reserved to describe an individual with menstrual symptoms that are severe enough to prevent her from functioning normally for one or more days each month.  Primary dysmenorrhoea is painful menstruation with no detectable organic disease. The pain in this condition is thought to result from uterine contractions, probably associated with uterine muscle ischemia and Prostaglandin’s produced by the uterus. Prostaglandins are known to stimulate uterine contractions, but they cannot do so in the presence of high levels of progesterone (a hormone secreted by ovary). Progesterone levels are high during the last half of the menstrual cycle, and during this time Prostaglandin’s are apparently inhibited by progesterone from producing uterine contractions. However, in the absence of pregnancy progesterone levels drop rapidly and prostaglandin production increases. This causes the uterus to contract and slough off its lining, which may result in dysmenorrhoea. In addition to pain, other signs and symptoms may include headache, nausea, diarrhoea or constipation and increased urinary frequency. Secondary dysmenorrhoea is painful menstruation that is frequently associated with a pelvic pathology. In some cases it is caused by uterine tumours, ovarian cysts, pelvic inflammatory disease, endometriosis and intrauterine devices.

PMS, or premenstrual syndrome, is a condition that affects a lot of women before the onset of their menstrual period. PMS commonly occurs during the week or two before the start of your period and can last until menstruation starts. The symptoms usually increase in severity until the onset of menstruation and then dramatically disappear. Symptoms are diverse as overall discomfort, oedema, weight gain, painful or swollen breast and tenderness, abdominal distension, backache, joint pain, constipation, skin eruptions, fatigue and lethargy, insomnia, depression or anxiety, irritability, headache, clumsiness and even uncharacteristically aggressive behavior. Some may even experience no symptoms at all. The basic cause of this state is not known.

Yoga can help by relieving the discomfort and keep you fit, strong, clear thinking and with bliss. There are poses that are particularly useful during the menstrual period. These poses ease menstrual cramps, heavy bleeding, pelvic discomfort and the low back pain associated with menses. They are also effective in smoothing out the emotional rough edges some women encounter at this time of their cycle.

If the menstruation is normal without giving any pain, headache, irritation, anxiety, suffocation, depression one can do Ujjayi and Viloma pranayamas in a sitting position.

This asanas relax the muscles and nerves which are under constant stress, strain and irritation. If done above asanas restfully, it checks the over bleeding, soothes the abdomen and makes the throbbing brain-cells rest. These asanas help those who suffer from head-ache, backache, heavy bleeding, abdominal cramps and fatigue.

Inversions (like head stand, shoulder stand) are not recommended during the menstrual period for philosophic as well as physiologic reasons. During menstruation if one does inversions the blood flow will be arrested. It may lead to fibroids, cysts, endometriosis and cancer, damaging the system. According to Ayurveda philosophy, during menses the direction of energy is down and out of the body. This flow should not be obstructed or reversed as it is in inversions.

Urine, faeces, phlegm are weast products in the body and so are thrown out of the system So you cannot hold, mucus etc. If they are retained within they invite all diseases.

The Inversions are very important to the health because they produce a revitalizing effect on the entire body. Although Inversions are not recommended during the menstrual period, the inversions have their own characteristics. when done during pregnancy they hold the foetus safely and healthily. It is greatly advantageous for those who have frequent miscarriage.

It is recommended to read “Yoga: A Gem for Women” by Geeta Iyengar.

Geeta and her father B.K.S. Iyengar were the first yoga masters of the twentieth century to strongly address the need for women to nurture and honour their bodies by adjusting the way they practice yoga during the different cycles in life.